Quantrilla (Quanny) Ard is a faith-based personal and spiritual development writer who lives in the DC Metro area with her husband Donny and three littles (Quentin, Dylan, and Logan). In addition to being a dedicated wife and mother, she is a entrepreneur, doctoral student, and curator of all things lovely. As a woman on her own quest of shining a light on the shadowy, hidden places in her life, she writes as the PhDMamma about things she knows to be true in hopes to encourage others to do the same. Her spiritual goals and her love for Christ propel her quest to share the spiritual journey with other women- to walk alongside them and encourage them with words, deeds, and wisdom. Quanny believes in the power in collective strength, community and fellowship. You will find her wherever people are sharing stories of triumph.

Reflect: Jesus welcomed everyone. This made the church leaders upset and they would often try to get back at Jesus by saying things about Him that weren’t nice. In this passage, they meant to make Jesus look bad in front of others by saying that He welcomed and ate with sinners. Instead of saying something back to them, Jesus told a story about a father and his two sons. One of the sons asked for his part of the family fortune up front and left home. He spent all his money and ended up feeding pigs. Things were so bad, he considered eating what he fed them! The son realized that the servants in his house were treated much better than how he was being treated, so he decided to return home and ask for his father’s forgiveness. His father saw him coming in the distance, ran to meet him, and greeting him with joy. The son was welcomed back into the family as if he had never left. The brother that stayed behind was very angry and complained to his father. The father told the other brother that he had always been there and that all was his, but it was if the brother who left had died and now he is alive, he had been lost and now he was found. That was a reason for much celebration.

Respond: Have you ever lost something that meant a lot to you? What did you do? Did you keep looking until you found it? That is what God does for us. Find a piece of paper and draw a story in pictures about something you lost and found. 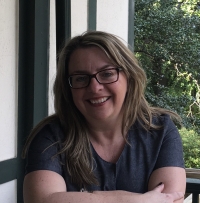 Her book,The Best VBS Workbook Ever! was published in 2017 (see it here) and she is also a contributing writer to John Roberto’s book, “Faith Formation with a New Generation” and 2020 InsideOut camp curriculum.

Lisa is also a regular contributor to Building Faith, a dynamic workshop leader, and active member of Forma and eFormation, Lisa enjoys supporting others in their ministries.

Now as the Director of Digital Ministry for Membership Vision, Lisa is intrigued by the idea of helping people find God in the digital space and writes about it on her digital ministry blog.

Lisa continues to grow in personal faith and understanding through her participation in Education for Ministry (EfM), and earned a Certification in Leadership in Lifelong Faith Formation from Virginia Theological Seminary and Forma. A native of Pittsburgh, Lisa enjoys hiking the woods of Western Pennsylvania.

Reflect: Today’s gospel story is referred to as “The Prodigal Son.” One definition of “prodigal” means one who is wasteful, extravagant, thriftless, irresponsible, self-indulgent, and reckless. None of these are qualities that any parent wants to see in their child! But the younger son in the story indeed demonstrates all these qualities, wasting his inherited money and living life large. Too large, in fact, until the son finds himself in a position in which he is treated lower than his father’s lowliest servants. His food is no better than the slops fed to pigs. When he returns home, ashamed and humbled, he asks only that he might be treated as a servant. But his father responds in a way that reflects another definition of “prodigal” – his father yields abundantly to the situation, giving way not to anger at his child’s misdeeds but to a boundless joy at this lost child’s return. The father is excessive – another word for “prodigal” – in his limitless love. There is one character, however, who is not so “prodigal.” The older brother, the one who always obeyed his father’s wishes and does the right thing, finds no extravagant joy in his brother’s homecoming. He questions why his brother should receive such an outpouring of love.

Respond: “It’s not fair.” How often do we say those words? What causes us to see something as unfair? When bad behavior is overlooked or forgiven? When someone gets more than they deserve? But who are we to decide what anyone deserves? Jesus tells this story when he is asked why he eats with people who have done bad things. Jesus suggests that rather than calculate what is fair, and who deserves what, better to be prodigal in our love for one another.

How do you celebrate when God finds you?

Wallace Benton serves as the Assistant to the Rector for Youth Ministries at St. David's Episcopal Church in Roswell, GA. He's been fortunate to have grown up in the Episcopal Church and became interested in youth ministry after volunteering with his former youth program after college. Wallace has worked diocesan retreats and activities such as New Beginnings and Happening.

Currently, he is the lay director for New Beginnings in the Diocese of Atlanta. He is also a member of the Episcopal Youth Ministry in ATL podcast (which you should check out immediately!)

Reflect: Of all of Jesus’s parables, this is most likely the one you’ve heard of many times. A son goes to his dad and asks for his portion of his dad’s estate. After spending all of the money and resources, he humbles himself to take a role where he feels less than the pigs he’s serving. He then makes his way home, and is greeted warmly by his father. After his father starts the process of hosting a feast, the brother complains to the father about the son wasting his portion of the inheritance. The father reassures the brother, and reminds him that the son was lost and now he’s found.

Respond: What does it mean to be lost? What does it feel like to lose a toy, leave your phone at home, or misplace your homework? How amazing does it feel to find a lost item? What about if you are lost? There are times in our lives when we separate ourselves from God, and in those moments, we are lost. God rejoices when we decide to return to God’s loving embrace. How does it feel for you to be “found” after times of separation from God?

CJ is a writer and speaker from Brooklyn, NY. He spends most of his time hanging with his family, playing with his daughter, playing basketball, and reading. He's passionate about seeing the gospel spread in his city, in Brooklyn as it is in heaven. You can catch up with him on Twitter @CJ_Quartlbaum or at CJQuartlbaum.com

Reflect: Thank God for salvation. The ugly truth about sin is that is separates us from God with no hope for us ever bridging that gap. Jesus stepped in and bore our sin and shame to be our rescuer. It is because of faith in him that we can look at Psalm 32 with such joy. We are blessed because through him our transgressions are forgiven and our sin is covered. It is because of him that the Lord counts no iniquity against us and because of his work through the power of the Holy Spirit that the deceit is removed from our hearts and we are made new. That is the beauty of faith in Christ, we are made new. You are forgiven, you are changed, and made new. Jesus’ words to go and sin no more are made possible because he bore the brunt of all of your sin. This is the good news of the Gospel, a way was made out of no way. The end of the Psalm represent the appropriate response for those who are living in the new reality Jesus has made: Be glad, rejoice, shout for joy!

Respond: When football players score a touchdown, they usually celebrate with some sort of dance or move. It’s your turn: come up with different “touchdown” celebrations for the work Christ has done!

Download a printable copy of this week's reflections HERE.

The Way of Love

Our faith is not just something we check in with on Sundays, our faith is how we live lives of meaning and purpose everyday, if we will learn to notice and respond to how God is moving. But this awareness, like anything worthwhile, takes practice. Which is why a weekly discipleship practice of Reading, Reflecting, and Responding to scripture in the context of community is so important. The following devotions have been written with this practice in mind. Use them with friends or family to help you deepen your experience of faith experience from Monday-Saturday.

Bring offerings of food the 1st Sunday of each month! Grace Episcopal Church works to distribute these offerings locally. Call the church at (815) 625-0442 with any questions!